skip to main | skip to sidebar

This was from Hiba

it was a greaaaaaaaaaaaaaat time
i wish if we can repaly the time ... i will not forget this everrr
nice group
:)
hiba ayyad
Posted by zafaran at 10:13 No comments:

Hi - thank you very much for your nice meeting to us in london .I was very late to write for you but I had a problem in my computer but now it is ok . I received your email and I will be happy to share you this discustion .and this is my report 4 you :

4th march
We reached Heathrow air port at 3 oclock and we met NANDIDTA and other friends
Then we went to London by train
In LONDON we had ameal all of us together then we had taken by friends to see sight in LONDON and we were very happy
5th march
We left London to LIVERPOOL to NAHEDA house .she is PALESTENIAN woman from beet exa
At2.30 we had meeting with many people most of them doctors and we discussed the health essu in BELEN
At 5 oclock we had another meeting with women in the mosque the number were big
6th march
In the morning we visited the children hospital and we had asmall meeting with the stuff
We visited a nursary and we met ladies and teachers and we discussed together about the twining links and about the bad situation in PALESTINE
We went to the green house .its aplace that activities done by children after schools
We left LIVERPOOL to another meeting in MANCHESTER with PAKESTENIAN woman called sahar we had a meal and we met a palestenian woman called MUNA from GAZA and she shared us the meeting and MUNA talked about the bad life in GAZA THEN WE RETURENED BACK TO Liverpool
7thmarch
We went to share people the vigale which they used to do it every saterday
We went to the international woman day and we had ameeting with mixture people ladies and men we discussed many useful issuing palestine especially about palestenian woman
In afternoon we had ameal in aLEBANON restaurant
8th march
We had a meeting in the churche there were a lot of people and they were interesting and interested about what happen in Palestine but we felt sorry because the priest was angry because he did not want us to speak about political issu
At 11 oclock we went to NELSON to the MARDSONcenter and there were a big meeting there (there was a good preparing for meeting)
9th march
We had meeting in boys school
We had another meeting in girls school
We had ameeting in the collage it was mixed students and stuff
10th march
We had 3 meeting in BLACKBURN collage
Ameeting on air in the BBC RADIO LANCASIRE
THE last meeting was in cemene coffe shop then we came back to LONDON again
Posted by zafaran at 10:09 No comments:

I arrived home safely, thank God, after a wonderful visit to Britain with a wonderful group.
I enjoyed very much the gatherings and meetings with you and the nice places we visited and I enjoyed seeing the important places. In fact you all were very kind, many thanks and appreciation to you and to the team who hosted us. I will be in contact with you and continue the cooperation in the future.

Thank you again and best regards and love to all.
Posted by zafaran at 12:05 1 comment:

Letters on their way to Brussels 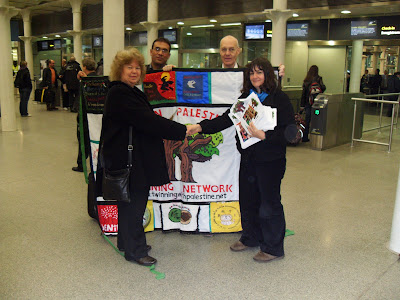 The women's visit letters calling on the EU to enforce the human rights of Palestinians being delivered to Jean Lambert MEP at the Eurostar terminal at St Pancras International Station. Jean Lambert will deliver them to Luisa Morgantini.

Hundreds of letters were collected during the women's visit and delivered by the Palestinian women to Frank Dobson MP for delivery to Douglas Alexander, International Development Secretary, calling on the British government to act... (See earlier post.)

The letter can be found at:http://www.twinningwithpalestine.net/xdocuments/0903humanrightsletter.doc
Posted by zafaran at 01:36 No comments: 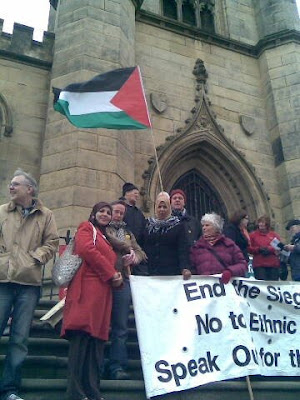 The visit helped develop twinning further in the Black Country, strengthened it in Walsall, consolidated it across the country....

[quote from Walsall organiser, more to come]
Posted by zafaran at 02:37 No comments:

Twinning expands in the Midlands

We had 3 great events in Birmingham and time for a nice meal with women from BRTI and chance to rest. We have so many new activists in Birmingham and the visit really helped to pull in some of the newer people. My branch have passed a motion to send 2 delegates in April. ..

Telford Aboud link is actively being sought and they are hoping to send at least one person in April. Dudley are also keen and will be twinning with Kufer Namaa... They are also hoping to send someone in April ...There is also interest in Coventry and a new group is tentatively forming....
Posted by zafaran at 02:03 No comments: